Climate Noble; a dummies guide to win the 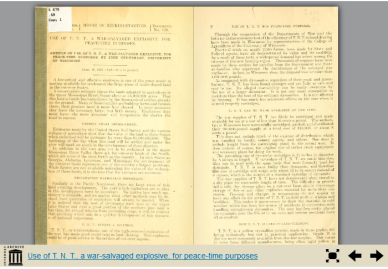 Use of T. N. T., a war-salvaged explosive, for peace-time purposes

At the backdrop of heightened threat from the terrorist attack, we as a human race must pause to understand if the direction we have been taking is the right one.

Every step the human civilization has been taking as different subsets have always brought havoc to some while the others have profited.

Peace can not come from the barrel of a gun and this can’t be better underscored than by looking at how we as a collective perceive what is wrong and what is right.

The greatest irony in modern world era is the concept of the Nobel peace prize. Derived from a means which by default was destructive to begin with.

To the younger generation who are not well versed about it – a short brief on Noble is below.

Alfred Nobel’s will prescribed that the Peace Prize was to be awarded by a committee of five persons chosen by the Norwegian Parliament (Storting) and should go to the person who accomplished “the most or the best work for fraternity among nations, for the abolition or reduction of standing armies and for the promotion of peace congresses.”(read).

While the World today reverberates to the boom of TNT or rather the newer versions and variants, lets try and find a solution form such an Irony !

And award the Noble for a much more nobler purpose like saving the Planet through sustainable practices ?

Are we going to continue with the never ending cycle of retribution, confusing that with punishment (which essentially differs from retribution) and make the world a much more dangerous place, with bombs flying around the restive Middle eastern & Mediterranean region while World Leaders congegrate to find solution to prevent global warming!

Will the United Nations CoP 21 in Paris also blow up into thin air ?

Will we find someone, a statesman perhaps who would come up with an idea which would be less bombastic and more real ? Who will win the race to win the Climate Noble ? And actually be able to link Global Warming – Food & Water Scarcity and Disease – War and Riots together and be able to unite all the Nations of United Nations to act on an everlasting sustainable solution, devoid of devious politics and personal profit.

Prime Minister Shri Narendra Modi could also be the answer.

Because he lends his ear to those who have chosen him to govern. At least till now, it can be safely assumed so.

(Why else would his Google+ account add an Aam Admi like me? and many of my kind.)

Before being accused of bias, lets agree that many an Indian both in India and Abroad are “fan” of his forward thinking ideas on good governance and development agenda.

Failing which the fans would stop revolving around him.

I wish him the best for showcasing India at Wembley stadium yesterday and really hope to see the Winter Session of Indian Parliament working towards making strong and implementable laws to abate climate change.

But working towards winning a Noble would be a win for India’s contribution in abatement of Climate Change and Global Warming. And India must lead the way. Should it also choose to grow as it wants as an Economic Power. Ecology must be given priority, without losing focus on Sustainable development.

For the last 20 CoP’s we have heard what other Nations want. Now its time we Unite the Nations! As was the call given beside the rostrum containing the green marble desk. And who else but Shri Modi has the guts and the gumption to do so.

Below are some ideas which may or may not have International resonance, but it is definitely India centric.But as India is presently the “darling” nation to fêté with presently; its green solutions may perhaps save the world.

Let us begin with RE solutions, especially making roof-top Solar PV mandatory in Indian Cities. More so in the Megalopolis and the Tier-I Cities.

Irrespective of size of roof. Let all the roofs be installed with solar within each city, we can use any business model as long as the power is directly evacuated to the smart grid and consumed within the city. Extra power can go to the peri-urban areas or industry. This way we ensure gradual withdrawal from fossil fuel based power and at the same time do not cripple critical functions with use of still adolescent RE solutions. And at the same time climb down perhaps in a shorter time frame from being the 13 most worst polluted cities in the World. And while we are at it a few more suggestions for the Cites before we even attempt of calling the race for Smart Cities design and implementation –

आवाज़ कम करो – We in India are a population of 1.25 Billion people. Even our whisper can actually become a din. While it would be a little difficult to throttle throats to keep the voices down, we could actually do two much more simpler things. As sustainability in inclusive of many things, not just energy and water.

1. Ban Loud Speakers, in-fact we can surely limit at the manufacturers end, the PMPO (peak music power output) to what is as per regulations. Extremely loud speaker would require a special licence, as we do in India for guns. And user has to apply to Magistrate office to get one. And this licence would only be valid for a season or purpose specified,

2. Regulate the Auto-mobile horn, a simple governor which kills the horn post 1000 use and can only be activated on-line by paying a fee not less than Rupee 2000, would surely quiet down the cities of India.

Along with reducing the noise pollution let’s get Reva by Mahindra & Mahindra on the city roads. Make that and similar auto-mobiles the only vehicles which can ply on Indian city roads. And for once let the corporates get their act together. Our children need their lungs which can’t be compared to a profit bar graph. Or stop celebrating Childrens day on November the 14th every year. And turn it into a day when we count how many of our future generations lives will be short-lived and terribly challenged due to lung diseases.

What our PM and his entourage could perhaps do is tell the packed crowd as how on his next visit our PM could fly in an aircraft which would be powered partly by wind turbines.

We all know that a commercial airliner flies at a minimum speed of 875KM/hour which is around 543Miles/hour. A turbine which generates say 10KW requires a wind speed of 25 Mph. So one can hopefully do the mathematics of what a 543mph wind speed can generate. 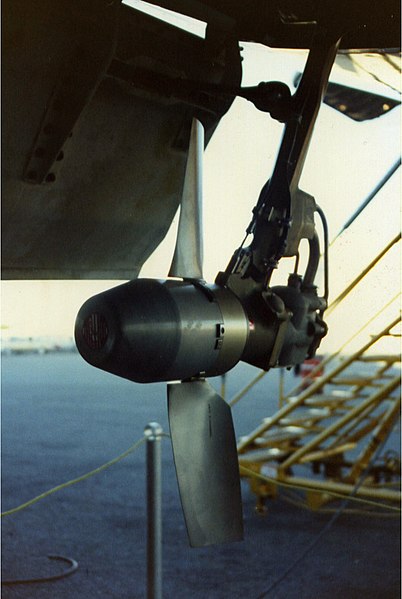 Air-plane wings typically have two jet engine and the jumbo have 4. If we can replace or modify the jet engine into a hybrid system which can generate power both when the turbine is fired to rotate via use of a combustion engine or simply utilizing the very high rotation,which would come with the spinning of the blades at such high-speed, to charge up the dynamos which could at-least provide with auxiliary power during cruise speed.

The idea which I always propagate is – never try to invent the wheel. The guy who did it was smart. And I am not smart. So I believe in adaptation.

The image shows a wind turbine named “Ram Air Turbines”. The most appropriate name given by the inventors, who I am sure would be welcomed with open arms and a very very warm welcome in India by the present Government.

After all Lord Ram was an Indian and the beloved of BJP !

Coming back to the point, it more or less works as an emergency power backup during landing and essentially used in small planes for opening their landing gear.

What I want to say is that the idea is not new and the technology is also understood. But no  commercial jet aircraft can have small turbines protruding out of its fuselage, the drag would be enormous.

But adapting it, what we Indians call “Jugaad” is another thing. And I must humbly request my government to consider it as an idea which our scientist must explore.

True the World is already thinking about solutions such as these, but it is not about thinking but doing it and putting it out in the market before others do, That is what business is all about. And we need to also follow the clarion call of “Make in India”.

And as a Nation we must find the right atmosphere to inculcate the idea of start-ups in all filed not just software, which we have already championed. And going gaga over E-commerce is also not something to be too excited about. With no intent to insult or hurt any sentiment, portals are nothing but modern day shops and its owners shopkeepers.

We need inventors and innovators to tackle global warming and bring about sustainability in business. The Electric Aircraft shown above proves that we already have competition.Parallel to this aerodynamic designs are already being looked into to make aircraft have one single body.

So India must come forward and think of how it can really challenge the world and become the seller of sustainability rather than buyer, which is what the current drift of the matter is.

We must think from our position of strength.And build upon it.

A couple of MIT engineers research on electricity generation and land use, estimates that solar power to produce 100% of world electricity generation would require 5,500,000,000,000 square meters (5.5 x 10^12 m^2). (link to original page). While the authors of the article love Nuclear, I would humbly ask them to wait till they can give us Fusion instead of the present day Fission technology.

World wars have been fought and are still being fought to capture or retain a piece of land mass. Unless we start to think of innovations and utilize the Reuse & Recycle policy, we will be seriously challenged in the near future on finding enough surface to utilize the abundant Solar Power. And by the way Sun’s power is pure Fusion technology without using Fission as a “trigger”.

My second suggestion or idea would be for India to have the airborne wind turbines off-shore and near the Indian sea ports, tethered to old ships which otherwise are sent to the scrap yards.

Many of the oil tankers can be used to make floating power stations which can be equipped with a combination of wind turbines and Solar PV, (CSP?) which would provide enough power to be utilized by the docked ships as auxiliary power thus saving a lot of fossil fuel from burning and creating more GHG. While Eco Marine Power of Japan and many such companies are already adapting the idea into their operational ships. If we truly want to use the wind-solar hybrid and also make a sustainable business out of it, we must allow the long coast line of India to dock off-shore ships or barges which are at their end of life and use them as floating platforms to generate power.

This would not only help India but one or few more contentious issue can also to some extent be solved by utilizing the ships.

For example the empty hulls can be modified to become soft-drink factories, where they are privately owned and they create their huge requirement of water right from the sea utilizing the solar for desalination ! Before we can finally shift our industries to the Moon. [Green Business Ideas : How about taking the polluting industries to Moon ?] which may just be possible if we can stop and save enough money which we spend on creating war machines which mostly get mothballed because hardly any Nation has the will and energy to wage another world war for conquest ! Those days are thankfully over.

Its time we conquer the 2°Centigrade Warming of the World.