Green Business Idea – A sustainable guide for Retail to win against E-retail in India.

A long time ago, people in want of grocery or clothing used to go to a designated date in an open ground where merchants gathered – it was termed as “Haat”. 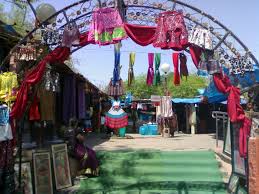 While the name “Dilli Haat”, is derived from the same concept; its open nearly every-day thus “shops” as we know them evolved over time.

Even today, in the dusty by-lanes of sleepy mofussil towns & villages, where cultures haven’t changed much since the East India Company days; the shops close for the afternoon siesta and are open but just about 2 hours post sundown. These shops are usually day-lit and most having been designed in vernacular style don’t usually require a fan. Although you would now-a-days invariably find one hanging from the central beam. Immobile as there is usually no electricity to run it. More so in peak summer afternoons.

As all the power that is being generated by the creaking Coal fired Thermal plants in India can’t cope of with the demand the swanky malls require to keep their air-conditioners humming. And the spot lights which is tactically angled with precision to highlight the wares in the hundreds of designer shops within the malls.

But as the saying goes, Time is constantly changing and for all that glitter and glamour the large retails brought in, along with the ease of shopping. It left in its wake a huge carbon foot-print. With the angst of Climate Change being felt around the World the buyers to have begun to discern. Helped by the ease of shopping online and keeping one self far away from the madding crowd has certainly helped boost the E-Retail.

And with some serious high net worth individuals with great social standing and industrial acumen investing in some of the stellar performers, E-Retail is here to stay.

This gives some serious competition to the standard brick and mortar companies. This Diwali there were complaints galore, spread over every newspaper worth its name.

And just as the Newspapers, not very long ago felt the threat of extinction from Televised News; till they evolved and adapted, whilst some perished no doubt. The Brick & Mortar Retail can become competitive if they too wake up and think differently.

All they need to do is build an Energy Efficient Building (EEB) or those who only take up space within a building work towards Energy Efficiency Measures (EEM). EEM’s can be applied to existing buildings and if the management wants it, can register themselves with LEED or IGBC certification. And get a Green Building Certificate. Thus becoming world renowned.

It is a simple Green Business Idea, which would once more prove that Sustainability is the Key. And while the economic pundits, may read you many passages in sustainability, its Ecology which is the master of the game. Thus the more natural the design and function the more sustainable the Retail space will be.

There are various ways to deal with it. In the first instance, the Retail chain could hire professional Interior Designer or Architects who have been long practicing sustainable design. These people would perhaps not have the past experience in designing retail; not because they could not but because they chose not to. As modern retail, focuses more on other aspects, rather than true sustainable architectural design.

This does not deride the ones who do. But the designers, while having wanted to make a form which would follow function in its true sense; are often forced to work on perceptions which have been engrained in the client’s physique.

One just needs to visit one mall and hop to the next. They all look and feel the same. This over time becomes norm in design. Although the better managed, while being energy guzzlers are efficient in many ways, the copy cats typically cut corners and make a mess of things.

The Retail stores work with very thin margin of profits.

Now with the roaring success of E-retail, there is simply no more lee-way with the retail stores to cut corners and yet maintain their competitive edge.

But by designing sensibly or demanding a sensible and energy efficient design of the rental space, they can turn the tide to their favour.

There are many ways to achieve these, both for new as well as retro-fits.

It can be achieved by having a better lighting approach. If one could work with day-light and maximize its usage during the morning business hours then the following difference would be felt. We all know that light produces heat and it is this heat which the air conditioners first need to cool before the space gets conditioned to the desired coolth. That means the air-conditioners need to work more to get the same amount of cooling which translates to higher energy bills. Add to that the operation and maintenance cost of the lights and the compressor/filters of the air conditioner which is running extra.

There are ways and means to provide sunlight to every square foot of basement, 3 stories below. So providing the lighting into the stores and even blending with the desired interiors is not so serious a challenge for those who know how.

The woe gets multiplied in towns and cities where a diesel generator feeds the required electricity. The average unit bill shoots to ₹16/unit when we generate electricity from captive generators running on diesel.

We can today not only infuse sunlight to take care of the lighting needs but also almost eliminate the use of diesel in generators by using alternative technology to fuel it. In-fact the fuel can be produced on the spot out of thin air, the technology is in progress while fuel cells are already becoming a practice.

The Earth and Sun are the final source of energy. And its abundance is infinite. One can in a green-field or existing retail property use Geo-thermal technology to power their air-conditioners and top it with Solar PV to completely disconnect form the grid, in certain cases.

Very few understand that one of the prime expenses in a retail food chain is the gas they use to prepare their food. This too can be completely eliminated or limited to negligible cost if one follows true EEM’s.

When we mention food, we must also mention the highly depleted resource, water. Something any retail would require, to use in cleaning of the show-window or preparing food to simple drinking.

Application of rain-water harvesting can help. But by using expert hydrologist as a consultant, instead of hiring a bore-well drilling company. As they can advise on how to eliminate the cost of drilling deep when water can be had at half the depth. The water source can become near perennial with one good seasonal rain, if proper rain water harvesting technique is applied. This combined with sensible storage and use of Solar Pumps can save huge operational costs.

And while it’s true that high-end technology adds to higher cost. But by designing and building wise this cost can be made viable. In fact a Green Building can at times provide a 20-20-20 saving. That is up to 20% in construction cost, operational cost and earning through voluntary carbon credits by reducing the Green House Gas emission is possible.

Today one can create a 5000 feet square, ground + 1 storied building in 12days and start inhabiting it. A huge cost is saved in the interest of the term-loan, which makes it a sensible decision to take. While at the same time the product that is used to build it eliminates or reduces traditional high-carbon emitting materials thus follows the true Clean Development Mechanism. This is so applauded at the United Nation Framework Convention on Climate Change. (UNFCCC)

One could also make one of the walls in translucent concrete, to let diffuse sunlight and eliminate dark passages, which thus reduces use of artificial lights. These measures pay back in record time. Thus making the effort viable.

There are also options available to have RESCO’s, renewable energy service companies who work with a select few sustainable design firm, who on being hired, invests in the capital cost of Solar PV, thus eliminating any initial capital expenditure. With the option to pay-back in a 20 year period.

These design firms are presently exploring options to find investors who would fund the complete plethora of EEM’s – Geothermal, Low E-Glazing, LED & Air-Conditioners too. This system already works in the USA.

In fact some have tied up with Avante-grade entrepreneurs in India, who have manufactured products such as refrigerators, air-conditioners, ceiling fans and tube-lights which run with a mere 2 Kilo-Watt of Direct Current (DC) instead of A/c thus complement their efforts on a RESCO model of design.

So with Solar PV on roof-top a small retail shop can become completely self-sufficient in energy. Even with a CAPEX cost the fast pay-back period these product have, the company would have zero energy cost in 5-7 years!

The most important take away from the above is that each individual becomes a stake holder in making India a business power house while keeping sustainability of the eco-system and thus by default ones’ own self and prosper.

It’s time for Retail to adopt and adapt to Green Business Ideas!