With the grand event of UNFCCC CoP24 coming closer. It is that time of the year when Politicians would be high or rhetoric & poor on delivery.

As usual, evidence on the above inference would be from experience from events happening in India.

We begin with the City of New Delhi which at present is reeling under severe air pollution, both due to the annual crop burning as well as the bursting of fire-crackers. The severity of the situation is best shown by News18 images some of which I will be posting alongside. 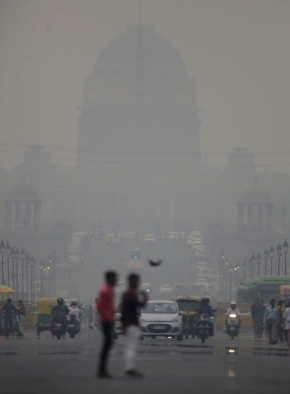 This image shows the Rashtrapati Bhawan ie; the Presidential Palace. The wings of the building North Block & South Block houses the HQ of Defence, Finance, Prime Ministers Office etc. Which means we are looking at the Nerve Center of Indian Administrative Power.

But it was the Supreme Court, which came out as the custodian of Environment, by virtually banning fire-crackers & crop-residue burning. Yet the honourable SC has been made a laughing stock! Nothing was done by the great political leaders, of all the great & grand parties of India which swear on their Gods that they are the messiah of the citizens of India. When they can’t fix issues in New Delhi, it would be foolish to imagine that any administration really works in other state capitals. We need not even mention the villages and small towns. It would simply add insult to injury.

Why have our political leaders and administration not been able to tackle this annual issue? What is the reason for those who know the subject in depth not been given the platform by our over-the-top, TRP seeking media to spread the message, to educate and prevent this annual disastrous event from taking place, instead of talking about it as an annual ritual after it has happened? We would never know. 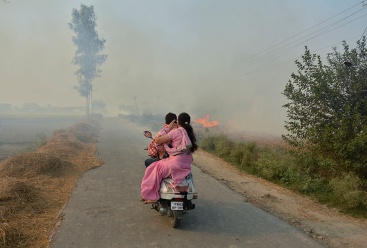 However, an attempt will be made through this article to explain in the easiest language possible about the dangers of pollution.  So that the common men can relate to it. What we see in the image here is hay being burnt in the fields of Punjab and a thick smoke envelope the entire area. Crop residue has always been burnt when New Delhi was called -Dilli, & perhaps if we can get the historical records at the time it was called Indraprastha. So what has changed which causes such a havoc? To understand it we have to look at many factors.

The growth of Urban areas, which never took into account geographic or historical data. Things like wind direction, rainfall pattern, forest cover, catchment areas nothing has ever been considered. What was forest land a few hundred years ago became land for cultivation, as trees were felled to satisfy the ever-growing populations as Dilli became the Capital of the Mughals and then the British. With Independence, came the need for Green Revolution, and the leaders brain-washed into considering everything western to be superior went into the use of pesticides and herbicides completely contrary to the Organic way of farming (which we are again adopting, form the West!). So today when we are burning the crop residue we are also releasing into the air the poison we put into our food!

So, when the Punjab Farmers Defy the Government Ban, ( click the link to know more) they must also be explained that they must not just look at it from the point of view they have, which is mentioned in the article but to safeguard their own lives too. 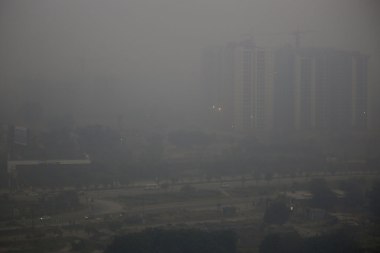 Then we schooled ourselves into the architecture which is completely western in form and function. Tall glass buildings, with utter disregard to wind-flow patterns, to such an extent that the wind flow within the city slowed down allowing dangerous fumes from unregulated use of automobiles, factory etc. What was once industrial district became part of new urban living areas, while the old well designed urban areas got haphazard building permissions for mixed use.

Today we have a problem, which can not be easily solved. There are economic and social considerations to be factored in. Add to that the political compulsions and vote bank politics and we all know that there will not be a decent solution coming anytime soon.

But by next winter, should the governments both state and centre want, pollution from both crop residue and fire-crackers can be stopped. The governments must map out the farms and make a law where the rich farmers would have to buy composting machines as well as air-purifying machines. These would be made available on low interest in easy EMI to them. While to the subsistence farmers, community composting machines, as well as rental air-purifiers, can be supplied, via NGO’s or CSR. Crop residue burning can be staggered in places where the supply of the machines can’t reach in the initial learning time.

As for fire-crackers, a sustained political campaign, maybe even using the Ramlila actors, messages must be spread pan India that Deepawali meant lighting of clay lamps. The alien concept of fire-crackers which crept into it as tradition must be removed by the sustained evidence-based scientific approach.

The Science and technology ministry should gear up with support form innovative startups to find better solutions.

The next point we must now tackle is sensitivity to effects of pollution and how it leads to climate change. We will begin with a very simple fact, which many may not even think or know about. It is only then the affirmative actions we all seek would happen, as without a groundswell of support nothing ever gets done. 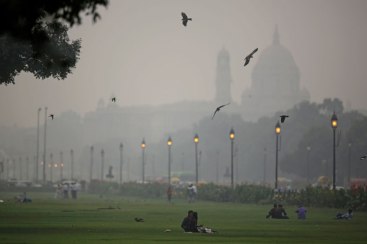 “High levels of pollution found in many of the world’s major cities are having negative effects on plants and insects, according to new research from the University of Sheffield.”[read more] Science Daily published the above report on 9th November 2018. “…plants exposed to high levels of nitrogen dioxide (NO2) — similar to levels recorded in major urban centres — are able to better defend themselves against herbivorous insects…Results from the study show that insects feeding on these leaves grew poorly, which suggests high levels of air pollution may be having cascading negative effects on communities of herbivorous creatures.”

Anyone with basic school education has read about pollination knows that insects & herbivore animals play a super-major role in germination and growth of plants and fruits. With all the money at one’s disposal, the “Midas Touch” still stands true. We may all rave and rant about culture and traditions, political compulsions but we forget that the basis of life is to have clean air-water-food.

It was the 3 basic pillars which created the civilization and we live in the Holocene Epoch, of the Quaternary Period, in the Cenozoic Era. Yes, era and epoch & period aren’t words we need to remember in History books. We all are actually living in one!

The point is, will there be someone left, to read in their History book about our Era or we are the last of the Human Civilization? Before the Armageddon which has already hinted its arrivals with fire-storms [click to know more] and hurricane wipe us out?