As the World in this March was introduced to the SREX report on Climate Change by the IPCC. The importance of civilization switching itself from fossil fuel to cleaner source of energy cannot be underscored, should it want to survive.

However to really see a boost in this sector there needs to be innovation and active participation from all stake-holders.

While there has been some traction in the effort to harness Renewable Energy in India for some time under the National Action Plan for Climate Change. With the various Missions like

While for a follower of Energy articles, the immediate focus would be with the Missions that are directly related to the industry, it is important for all to understand the reason behind all the missions. For they are inter-related in some ways or the other.

For example, with an understanding on the Strategic Knowledge for Climate; the RE sector entrepreneurs would have an understanding of the exact solutions which would not only benefit the planet but also give the right boost to the industry.

Likewise if we wish to retain the Himalayan Ecosystem, which is a source for perennial Water, the latter mission also gets addressed. So would be able to retain a forest cover while building a Sustainable Habitat if we look towards innovations which could capture the essence of the Missions as a whole.

The NAPCC further states, the following and this is where the present Green Business Idea takes off –

The NAPCC also describes other ongoing initiatives, including:

Ministries with lead responsibility for each of the missions are directed to develop objectives, implementation strategies, timelines, and monitoring and evaluation criteria, to be submitted to the Prime Minister’s Council on Climate Change. The Council will also be responsible for periodically reviewing and reporting on each mission’s progress. To be able to quantify progress, appropriate indicators and methodologies will be developed to assess both avoided emissions and adaptation benefits.

One such innovation is Solar for the Construction Industry.

Let’s understand how the Building & Construction Sector works. While they have not been given the sectorial stamp of the Infrastructure Industry, by the Government in all it’s wisdom. (And perhaps thereby allowing vested interests to continue wanton destruction of the Eco-system; which to an extent would have perhaps be negated with being associated as infrastructure industry which bear more scrutiny.) That the workings are more or less the same can’t be denied.

So while one builds residential & commercial complexes, there is a need for continuous and reliable source of power. If one is building within the city limits of some Indian megalopolis, “temporary power” as construction power is often termed, is availed by the builder/developer at a price higher than what the DISCOMS would provide to its consumers.

In some cities it is ₹14/- per KW. And in places where they need to depend on DG-set, the operating cost with diesel and its maintenance may shoot the cost anywhere between ₹16 – ₹22. The more remote the location the more use of DG. And this shoots up the cost of construction.

The additional burden is naturally passed on to the consumer. In most cases the average middle-class home/shop buyer. And if the market is not promising enough, some developers to keep the retail price within acceptable limits compromise on the quality of built space.

And it is precisely here that the Solar Industry can play a crucial role.

To those who are familiar with construction, they would understand that one of the main draw of energy comes from the Tower Crane and the Batching Plant. As much as 250KVA can be attributed to them which in large construction sites work day and night.

Should this be replaced by Solar Power during day-time use, either in-situ if there is space for it or via wheeling. A quantum jump in the requirement of Solar PV would give the right boost to the industry.

The Solar power can be provided in two ways. First and the easiest would be to through Wheeling. Wheeling is the term used for getting an open access to the already established Grid power line and by evacuating the generated power, through a 33/11 KVA transformer as would be the case, from the plot of land where the Solar Park can be established.

Some states have a free-wheeling policy and it is here that one must focus in growing this form of business.

A solar EPC can approach investors or even a builder/developer group and ask them to invest to put up a park which would help them achieve perennial source of Solar power, at a discounted rate. This would help reduce the CAPEX on the project. While how much of the benefit would be passed on to the end-user would be a subject of consultation, unless that becomes a clause by the Government, committed to its social obligation. 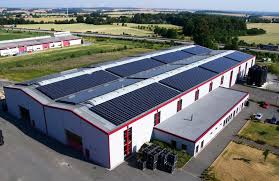 The in-situ option is more for larger construction companies such as L&T –Constructions, Punj Lloyd Group, GVK group, GMR group etcetera. Who take up infrastructure projects in remote locations. Where even the Grid Power lines at times not found going over-head. Here the project can be operationalized in smaller time-frame should the portable-cabins, ware-houses and worker quarters have in-built Solar panels, which can then feed a minimum power to start work faster, without depending on the large diesel generators.

And to make it a success innovation and collaboration both is required. The innovation is already explained. The collaboration which is required is that with a design firm which understands both Renewable Energy and Architecture, to create the space where normally there would be none found. Also in the case of infrastructure projects, the SPV have to be designed in a CKD format for easier transport and installation. Further, in this the orientation and latitude also plays a great part which needs to be adjustable every-time.

That this idea has already been tested and found approval is from the fact that the article is being written about it, if I may say so.

For any Sustainable Design Architects; they would find this as one of the primary drivers to attain the goal as envisaged in the National Action Plan on Sustainable Habitat. While at the same time carry the nascent industry of Solar, which needs all the care and support in this Sun blessed country.