As globalization and technology draw the world together, they create opportunities for innovation that are as great as any in the past three centuries. They create the potential for a second revolution in productivity — but one in which we no longer need to trade ecological assets for economic ones. –The Two Deficits, Part Four

This is one event which almost every super-market shopper has faced. You go out looking for your favoured item and you are always spoilt for choices. Every time there is a better tooth-paste or shampoo or cereal.  Look for an ice-cream and there are dozens vying for your attention. Same with Cars and motorbikes or clothes.

Thus one can divide the products into Food & Processed food, Clothes & Ready-made clothes, Transport & Personal Transport etcetera. Essentially all fall into certain basic categories which can be classified into FOOD-CLOTH-SHELTER, the pillars of modern Economics and foundation of civilization. (explained in my other article)

So if you buy a potato chip…you are buying processed food and just that. Potatoes which have gone through the same process of being selected from a farm, cleaned, cut, fried and added with the desired flavours and packed.

The machinery being used by one manufacturer would perhaps be of the same make of that of the competing brand and they both are purchasing potatoes from the same region, thus the soil and other climatic conditions of growing the product is almost the same or similar. And the packaging is also almost coming from the same source, petroleum or paper pulp. 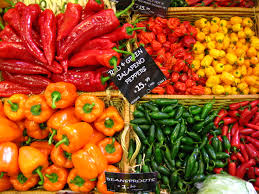 Yet each similar product claiming that it is unique. Some obviously are. Most aren’t. The only product which can claim to be unique every-time even when being manufactured in the same region are the ones we get naturally. I rest my case with the humble chilly.

And it is this Biodiversity which we need to protect and preserve. Else no brand can claim that they have “spice” in their flavour for their would be nothing to spice up sooner than later.

There is a move called The Lorax. A movie I would request the more knowledgeable to acknowledge by

screening it in Davos 2014.A movie which has been able to capture how desire turn into greed and how we Humans have lost the focus of why we started to work in the first place. It was primarily for sustenance of self and dependants. Which in turn was to give us happiness – safety – security.

While the protagonist at the end is able to save the World by saving a species from extinction, I do not know if many amongst us would like to place our bets on saving the Human species when we meet for the World We Want 2015.

“Why this children film and not Al Gore‘s – An Inconvenient Truth?” some would ask. Simple !  If we had achieved the goal in our life-time then the Millennium Development Goals would not have been mooted. It would have been a subject in History for our children to study.

“Problems are inevitable in any development program; failure is not.” –  Fail- Safe Management; A World Bank Publication.

Continuing from my last Planet Earth’s invite – Danse Macabre, where it is more than evident that Business are suffering and going to suffer severely in the coming years, innovation is the only adaptation choice we are left with. The doubters can read on the unprecedented flood of Central Europe posted barely a few hours ago.

The Green Business Idea  I’m about to suggest will be full of problems and as with many of my ideas half-baked and not thoroughly researched. Only soul-searched.

Brand shown here is only for literary purpose only.

Let’s talk of Potato Chips as an example. I do not know how many brands are there in the World but the Top 20 Potato Chip Brands have similar or different info-graphics showcasing that their brand is the best. And has World dominion.  What I do know however is that there always would be a Numero uno (first) and a Numero último (last). And there would also be some which are Numero acabado or terminado ! Because they could not compete in the cut-throat competition of the fickle consumerist modern society we call the modern civilization. Failure has nothing to do with quality (at times) but perceptions and trend and many micro & macro factors. Ask any cell-phone manufacturer. Or concept car maker. Or even a steel company.

So does that mean that the people who are rendered jobless are not worthy or the potato which made the chip not natural ? It is neither. When you are given a finite resource – man & material; there is so much you can do.

Try eating a full 7 course lunch just after having a hearty break-fast.Or try eating the same hearty break-fast say of farm – fresh apples in a non apple growing season.You can’t! Apples you will get, but they won’t be farm-fresh but freshly frozen.

Same happens for labour, what was achieved on this date can’t be achieved on the same date next month or next year. And even if it is attempted; not by the same set of persons. Some may not be around any more.

Thus with finite resources and finite work opportunities what we have led ourselves into is what in Hindu Mythological term is called – “Chakravuyu”. One in which to enter is easy but to come-out is difficult. When I say difficult I mean just that. Not impossible. As explained in the Mahabharata, when one is guided by the inner conscience of self and is of stead-fast mind devoid of greed and complete surrender to duty the chakravuyu can be broken as it was by Arjuna.

Equality and Equal opportunity can always prevent grief. And for that we need to collaborate. And it can be sustainable.

If we create only 4 hours of work per person with the same amount of pay or less ( as foretold – a difficult situation ) we almost eliminate joblessness.

Joblessness is a huge strain to the economy in form of payout of dole, social security etcetera.

Jobs of the people who are out of work, for example from a recently closed European TV company. Surely there would be experts in that pool who can fill in the shoes of those who need to put 14 -16 hours a day working for another TV studio, somewhere in another European or Asian or American Nation. And although having jobs; are equally miserable because of lack of time for self and family.

This misery manifests into anger and discontentment and is vented by protest and lock-outs demanding higher wages; knowing fully well that there aren’t any option of having a better time management and a better life. So the least they can do for their kith and kin is earn a few dollars more with an almost mirage like hope that money would make things better and give them a better life.

Imagine if we had 4 hours shifts.

For the same job we could have 6 people employed. That is an decrease by 6 times the unemployed ratio. A huge sociopolitical pressure can get released. It also allows for social engineering wherein population control as well as population management would be possible. Simply because when people are content, they readily accept radical ideas. (Sustainable Living and Climate Initiative: Socio-Political Decisions can have a profound effect on it.)

In the similar fashion instead of a Potato chip company on its way of becoming International giant – Giants by default trample everything that comes underneath it – becomes a benevolent benefactor and employs or buys the full produce from the near defunct smaller company at a fair price ( a price which that company would have naturally got had it been profitable) and or allows them to sell the lead produce with transfer of technology (with guaranteed non breach of secrecy contract). This way the giant does not have to grow its “very own” potato and thus destroy a paddy field and perhaps the livelihood of those with it. And compound the already fragile food scarcity issue.

Every season we allow for a certain amount of produce of a particular crop be produced internationally. Pooled at a common source and distributed as per demand amongst Nations above and beyond a standard quota which is equal for all. We thereby (hopefully) would not have Wheat rotting in the open storage pens, we would not have hunger and neither would there be a strain in giving the Minimum Support Price. (a very difficult problem but not impossible to solve).

It can be done for minerals and metals  too. Thus the service and manufacturing sectors of all hues can slowly and surely be able to reduce its destructive and unsustainable foot-print.

However, this would only be possible if Nations have able Governance and non-corrupt Government. India can’t presently take the lead. But by mooting this idea in the International fora can at-least be seen as a serious player in the goal to attain Sustainable Living and abating Climate Change as per the MDS vision.

Posted by Oyeta936 on June 12, 2013 in Susutainable Buildings & Climate Initiatives